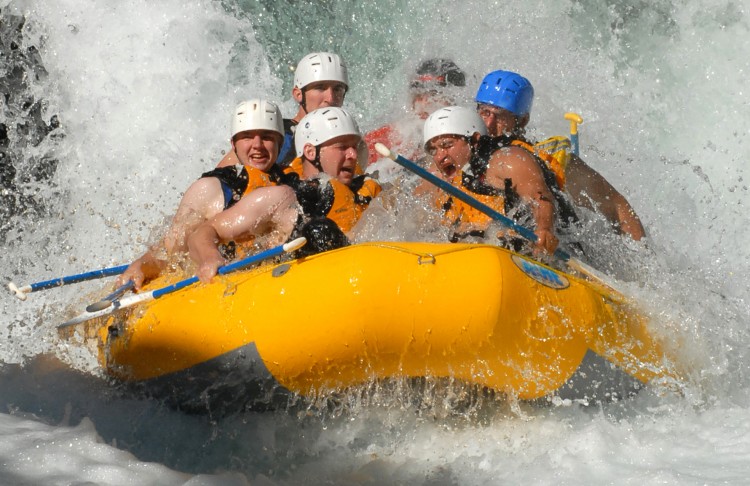 When God leads, and I follow, sometimes it’s with a sense of uncertainty, even fear.

But I’m sustained by God’s Word–a promise that God provides all I need.

“And my God shall supply all your need according to His riches in glory by Christ Jesus,” (Philippians 4:19 NKJV).

I know that fear doesn’t come from God. But, it’s there. The narrow path, the bumpy road, the unexpected turns, my own doubts.

God are you sure this is the way you want me to go?

During the summer months, the snow that gives Oregon’s Mt. Hood its white, winter frosting melts and flows in streams and waterfalls into nearby rivers. The Deschutes is one of those rivers, cascading down Mt. Hood’s eastern slopes into the valleys of Central Oregon. Guided rafting tours pack the river with adventurers looking to enjoy the high-desert scenery that borders the river along its winding path, and to ride the foaming and churning rapids interspersed along the way.

I’ve enjoyed one of these guided rafting tours more than once. An experienced guide keeps the raft’s passengers working in unison as they row with their paddles and cooperate to keep their craft from hitting a submerged rock or running ashore. The guide’s experience assures the raft successfully navigates the rapids, keeping the raft in the best position to avoid capsizing as it dips and rolls.

I’m not a fan of cold water. I don’t care to be bounced from the boat, dragged by rapids over rocks, or sucked under water by a whirlpool. On any one of these trips you would’ve found me paying close attention to the guide. I trusted the guide–their directions on where to sit, when to paddle, when to lean in–but the fear was there.

I’ve never fallen into the rapids, but once watched one of my raft-mates, as we entered a stretch of rapids, attempt to snap a photo, only to be catapulted into the river because he decided at the wrong moment to follow his own impulse rather than the direction of the guide.

Baptized, Jesus stepped out of the Jordan River and followed the Holy Spirit into the wilderness. For 40 days, Jesus fasted. Every cell in His body hungered for food.

When Satan approached Jesus to tempt Him, the devil attacked where He perceived Jesus to be weakest.

“If you are the Son of God, command these stones to become loaves of bread,” Satan cajoled (Matthew 4:3).

Freed from Pharaoh, the Hebrews stepped out of the waters of the Red Sea. Led by Moses they followed God into the wilderness.  Their food and water supplies dwindled. Hungry and thirsty–doubting–temptation overtook them. They complained (Exodus 16:1-3).

Wherever God leads, there is a corresponding temptation to doubt His directions.

God provided food and water for the Hebrews.

What would have been the harm in Jesus turning stones into bread?

Jesus trusted that where God led He would provide.

As we learn to rely on God to provide for our needs, the test of our faith is to trust that God is never early, never late and always on time.

When we commit ourselves to following God, He will lead us into situations where we must choose to wait on Him, or act on our own.
To act on His own, Jesus would have shown a lack of trust.

Jesus chose to wait.  He trusted God’s Word. He chose not to manipulate God’s Word to satisfy His hunger with food God had not provided.

But He answered and said, “It is written, ‘Man shall not live by bread alone, but by every word that proceeds from the mouth of God,’ ” (Matthew 4:4 NKJV)

About 500 years earlier, King Nebuchadnezzar took Hebrews captive from Jerusalem and brought them to Babylon (Daniel 1). Among those captives, four young men stood out among the rest. The king ordered that all the Hebrew young men be fed meat and wine from the king’s kitchen and receive training in the ways of Babylon. Through His Word, as recorded in the books of Moses, God had provided Daniel, Hananiah, Mishael, and Azariah with direction to avoid the defilement that would come from consuming the king’s meat and wine. Instead, they asked for vegetables and water.

As captives in a foreign country, these young men might have easily rationalized that eating and drinking from the king’s menu was the right thing to do. At least, it would have been easier, more polite, less controversial.  Politically correct, perhaps?

Choosing what God had provided, they stood firmly on His Word. They entered through the narrow gate, and God blessed them above all the others, with wisdom and health above their peers.

When you’re faced with temptation to take the easy path, the route of least resistance, when fear urges you to turn back, or stubbornness puts you in opposition to God’s call, choose instead to take the path where God leads, and trust in His promise to provide.

How to Pray: 8 Keys to Answered Prayer

How to Overcome Fear So You Can Live to Thrive [Video]

Put Your Kids’ Faith to Work with Summer Volunteering

I'm a counselor, writer and believer in the power of God to help you thrive in your marriage and family. I live with my family, a small herd of Boer goats, and thousands of honeybees near Portland, Oregon.

Please log in again. The login page will open in a new tab. After logging in you can close it and return to this page.